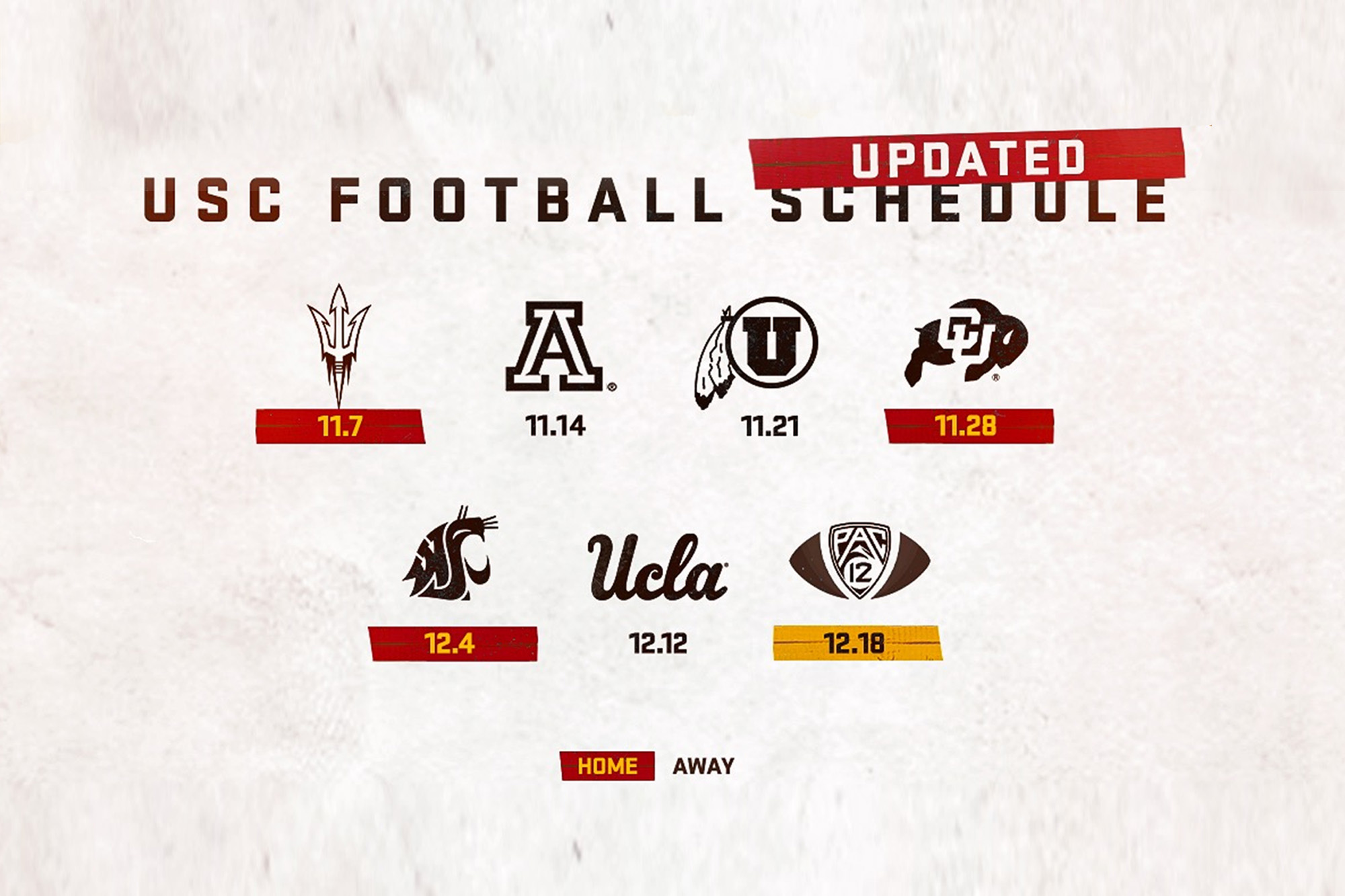 USC opens its 2020 slate at home on Nov. 7 against Arizona State, with kickoff at 9 a.m. PT on FOX. FOX’s Big Noon Kickoff pregame show, featuring Trojan legends Matt Leinart and Reggie Bush along with Brady Quinn, Urban Meyer and host Rob Stone, will be broadcast live from the Coliseum starting at 7 a.m. PT.

It is the earliest kickoff time for a Trojan home game since at least the early 1950s when complete records are available (a home contest against Loyola in the 1891 season began at 9:30 a.m.), as well as USC’s first pre-noon kickoff since an 11 a.m. home start against Utah State in 2016. It also marks the latest date that USC has started a season since 1918, when the Trojans opened against Stanford on Nov. 23 because public gatherings in Los Angeles were banned in October due to the Spanish flu. And it is the 10th consecutive year that USC plays the Pac-12’s first conference game of the year.

After its ASU contest, USC goes to Arizona on Nov. 14 (USC’s latest road opener since 1918, when it played at Whittier Reform on Nov. 30).

The Trojans remain on the road to visit defending Pac-12 South champion Utah on Nov. 21, then they host Colorado in the Coliseum on Nov. 28 of Thanksgiving weekend.

USC stays in the Coliseum for its North Division crossover game against Washington State in a Friday night contest on Dec. 4 (the teams did not meet in 2019). It will be USC’s 14th Friday game since 1990.

Troy then plays crosstown rival UCLA in the Rose Bowl on Dec. 12, tying the latest date that the teams have met (also in 1942).

All Pac-12 teams will play a to-be-announced Championship Week opponent on the regular season’s final weekend, with the 2020 Pac-12 Championship Game against the North and South Division champions on FOX at 5 p.m. PT on Dec. 18 in a home-hosted format and the league’s other teams playing on Dec. 19, with hosts to be determined. This is the latest finish to USC’s regular season since 1946, when the Trojans concluded against Tulane on Dec. 21.

Game times and television plans for USC’s other 2020 games will be announced later. All games will be nationally televised by either the ESPN channels, ABC, FOX, FOX Sports 1 or Pac-12 Networks.

Fans will not be allowed at any Pac-12 sports competitions until at least 2021, the league announced recently.

This is the fewest regular season games USC has played since 1920, when the Trojans went 6-0. This is USC’s fewest home games in a season since playing 2 in 1910 (if Troy hosts a fourth home contest on the last weekend of this regular season, it would be its fewest since also hosting 4 in 1918).

USC’s original 2020 schedule was comprised of 12 games that included 3 non-conference foes (Alabama, New Mexico, Notre Dame) in addition to 9 league opponents (all but Washington State and Oregon State), with a Sept. 5 opener. In late July, the schedule was revised and shortened to 10 games versus conference-only opponents (kicking off on Sept. 26) to better deal with the COVID-19 pandemic. Several weeks later, however, the Pac-12 postponed sports competitions until 2021 due to COVID-19 concerns. In late September, the league resumed the football, basketball and winter sports seasons based upon updated Pac-12 COVID-19 Medical Advisory Committee recommendations that took into account changes to testing capabilities, the prevalence of COVID-19 and cardiac issues and updated state and local health official guidance, with the health and safety of the student-athletes and those connected to Pac-12 sports as the number one priority.

This is the first interruption since 1943-44-45 in the historic intersectional series between USC and Notre Dame. This also is the first time since 1914 that USC has not played at least California or Stanford in a season.