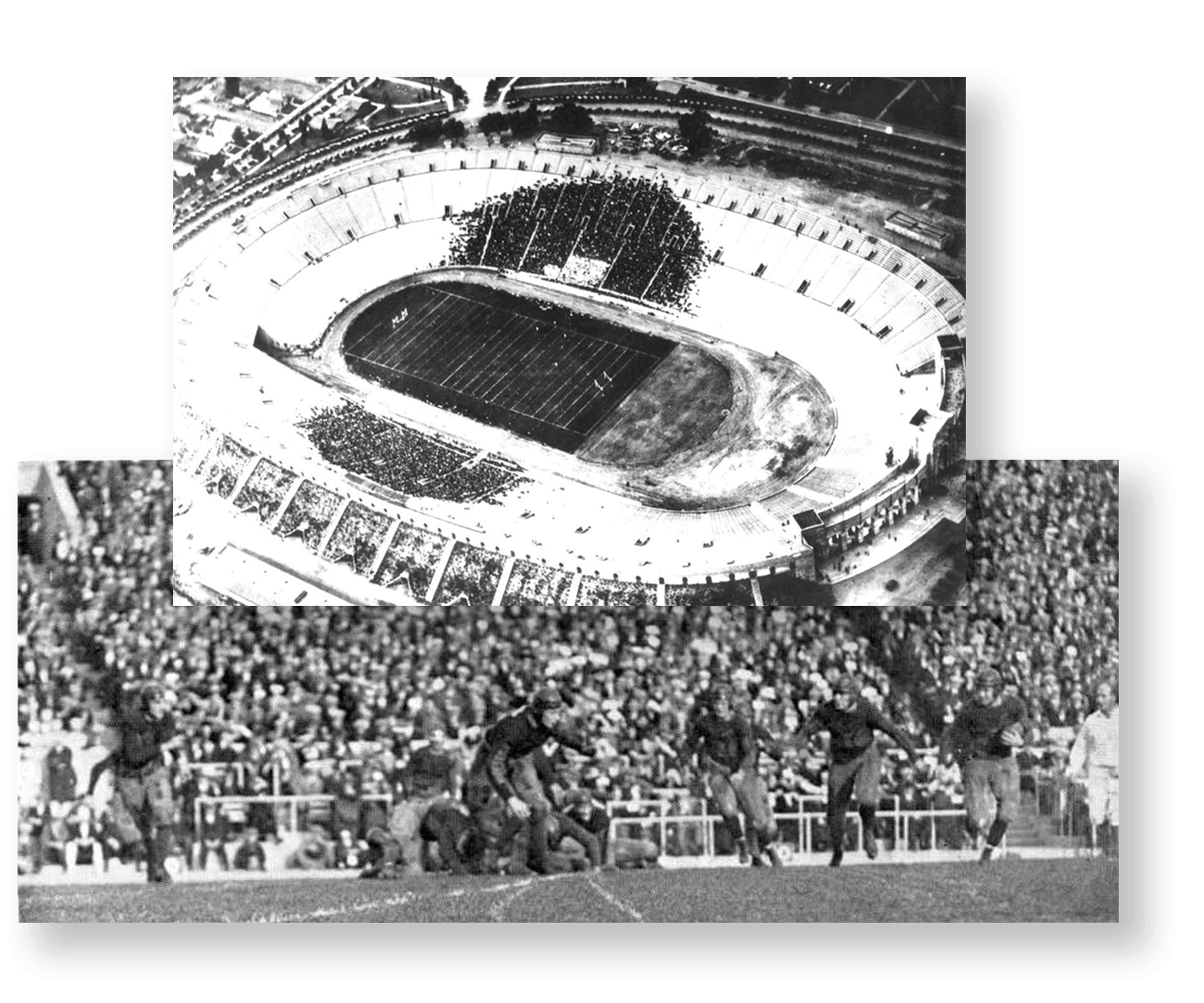 Several months after the Los Angeles Memorial Coliseum opened its doors to the people of Los Angeles in June of 1923, over 20,000 fans swarmed through the entrance to watch The Coliseum’s first ever football game: USC vs Pomona Pitzer. The game was a double header, opened by USC’s Freshman team, known as the “peagreeners,” playing Santa Ana High School. Next up, the Trojans swept the field against Pomona in a 23-7 win, guided by Coach Henderson. USC showed the crowd they were perfectly at home in their “shiny new bowl,” equipped with all the comforts and amenities of what was called the “greatest stadium in the world.”

The game was carried by USC’s Dolley and Campbell, who were running through Pomona’s defense until they were dizzy. By halftime, the score was USC 17; Pomona 0. In the second half, Pomona scored their sole touchdown. This was USC’s first of hundreds of wins in the Los Angeles Memorial Coliseum, and the first fans of millions to watch football in the stadium.

In the early 1920s, Luigi Montagna, better known as “Bull” Montana, often wrestled with his friend Jack Dempsey, a world champion fighter, prior to some of Dempsey’s larger fights to help entertain the press and spectators. The duo teamed for a 1925 special exhibition in connection with the U.S. battle fleet’s athletic day at the Los Angeles Memorial Coliseum.

The exhibition featured men and women champions in a various sports, and the crowd was filled with officers and enlisted men within the armed forces who were being honored. According to wrestling historian, J. Michael Kenyon: “The two celluloid artists attacked each other with convincing fury, scorning custard pies and other studio weapons, and battling with their bare hands. Dempsey finally heaved the Bull through the ropes after ten minutes of what was called wrestling and was conceded the victory.”

Dempsey continued to box in exhibition matches until 1940, but he was never a serious contender again. He became a successful restaurateur in New York City and remained a popular figure until his death in 1983. As for Montana, he continued playing movie bits into the 1940s. He died on January 24, 1950 in Los Angeles, California.

Paavo Nurmi, arguably the world’s greatest distance runner, held a track meet at the Coliseum. With over 500 athletes competing, many of them recent Olympians, the “Flying Finn” from Finland was still the clear star attraction, racing against American Lloyd Hahn to try and break the world record in the mile & a half race, as well as other exhibition events against local Native American tribes from California. One of the most impressive skills Nurmi held was not just his speed, but that he was one of the rare runners who could adjust his pace to a variety of different races, from the 1500m to the 10,000m — even competing in the 3000m steeplechase!

Throughout the course of his career, Nurmi set 22 world records, and won nine gold & three silver medals in his various track & field events at the Olympics (1920, 1924 and 1928). Nurmi, who rarely ran without a stopwatch in his hand, has been credited for introducing the “even pace” strategy and analytic approach to running, as well as for making running a major international sport. 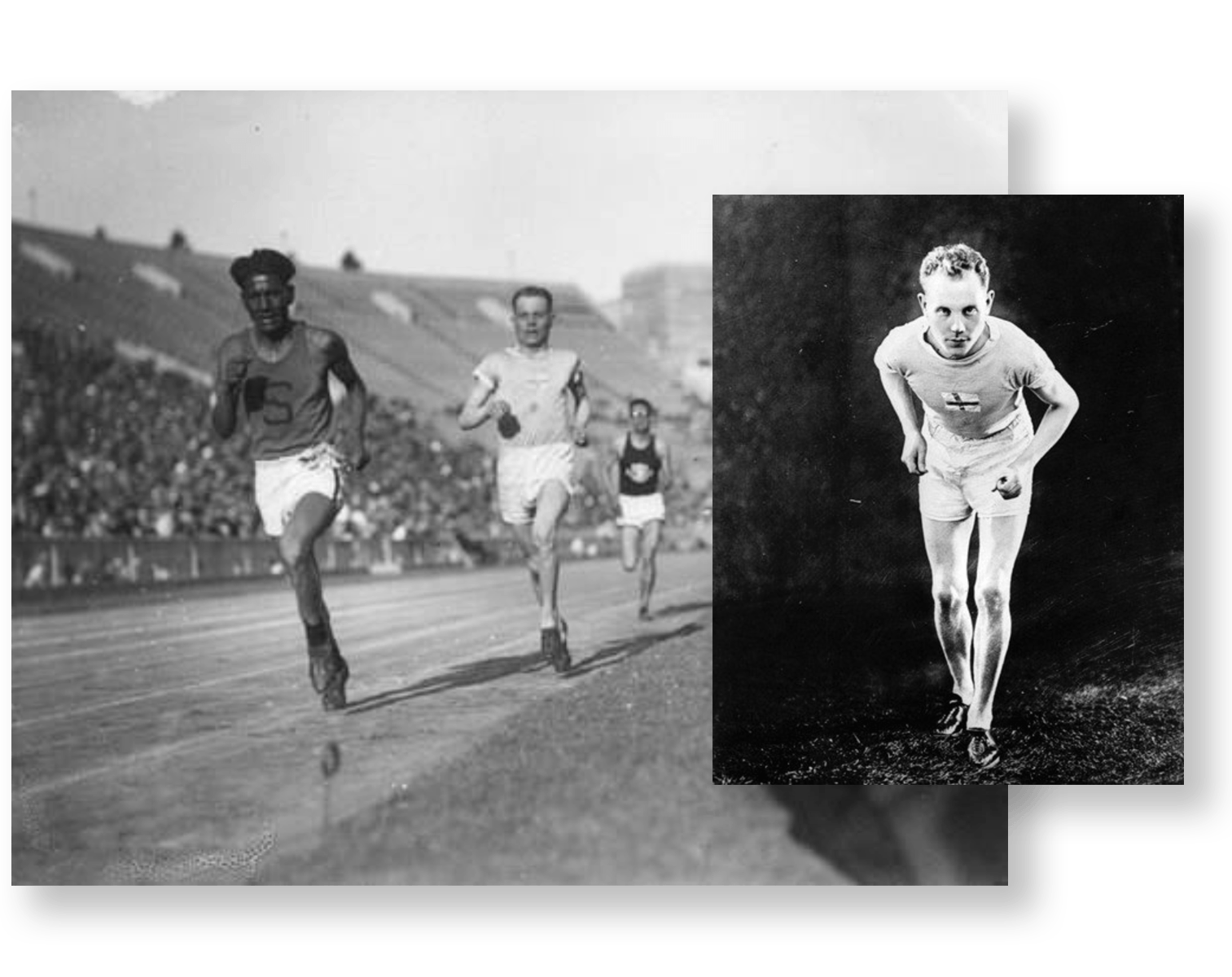 Charles Lindbergh, the hero who piloted the first trans-Atlantic flight nonstop from New York to Paris, was greeted by 60,000 admiring fans at the Los Angeles Memorial Coliseum. Colonel Lindbergh flew into LA in the “Spirit of St. Louis” air cruiser, dipping and diving to all of those in awe on the ground. Following a cheerful parade that went from First and Broadway all the way to the Coliseum, Lindbergh delivered his speech which focused on bringing awareness towards the need for air supremacy in America, with every major city opening an airport and pioneering a new world of commercial aviation. 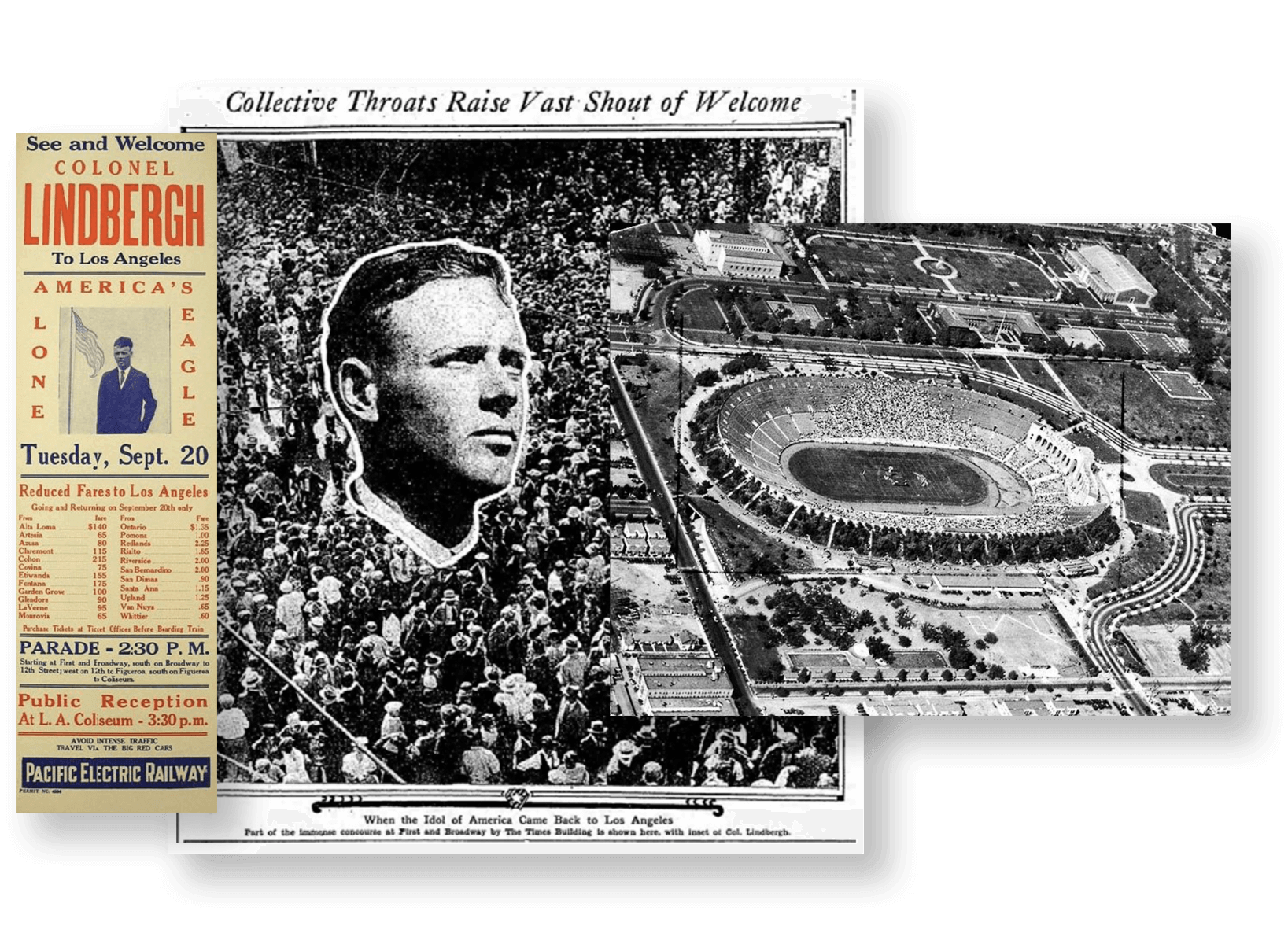 “College” is a 1927 comedy-drama silent film. The film takes place in Southern California, directed by James W. Horne and Buster Keaton. Keaton also stars in the film, alongside Anne Cornwall and Harold Goodwin. The film was screened at the Los Angeles Coliseum, making it the first movie to ever be played there. 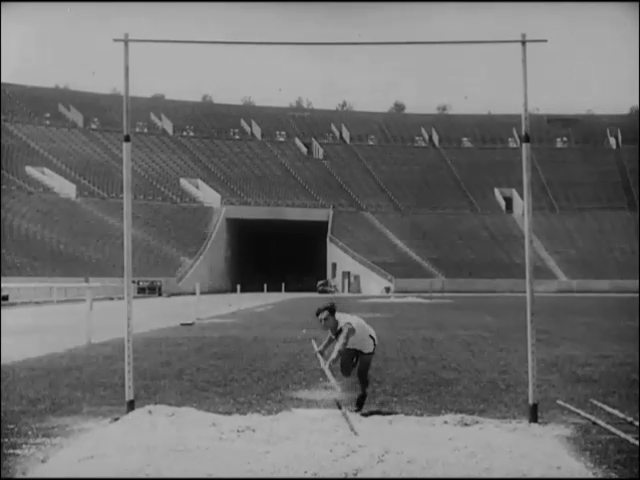 Today marks the 85th anniversary of the opening ceremony of the 1932 Summer Olympic Games held at the Coliseum. The total number of attendees at the opening ceremony was 101,022, and featured athletes from 37 countries, including the 357 men and 43 women competing on Team USA. It is estimated that over 1.2 million fans from all over the world attended the Games (interestingly, the same number of people currently residing in the City of Los Angeles at that time). This was the first Olympics which involved the setup of an Olympic Village for the visiting athletes, and also premiered the use of a 3-level award ceremony podium. 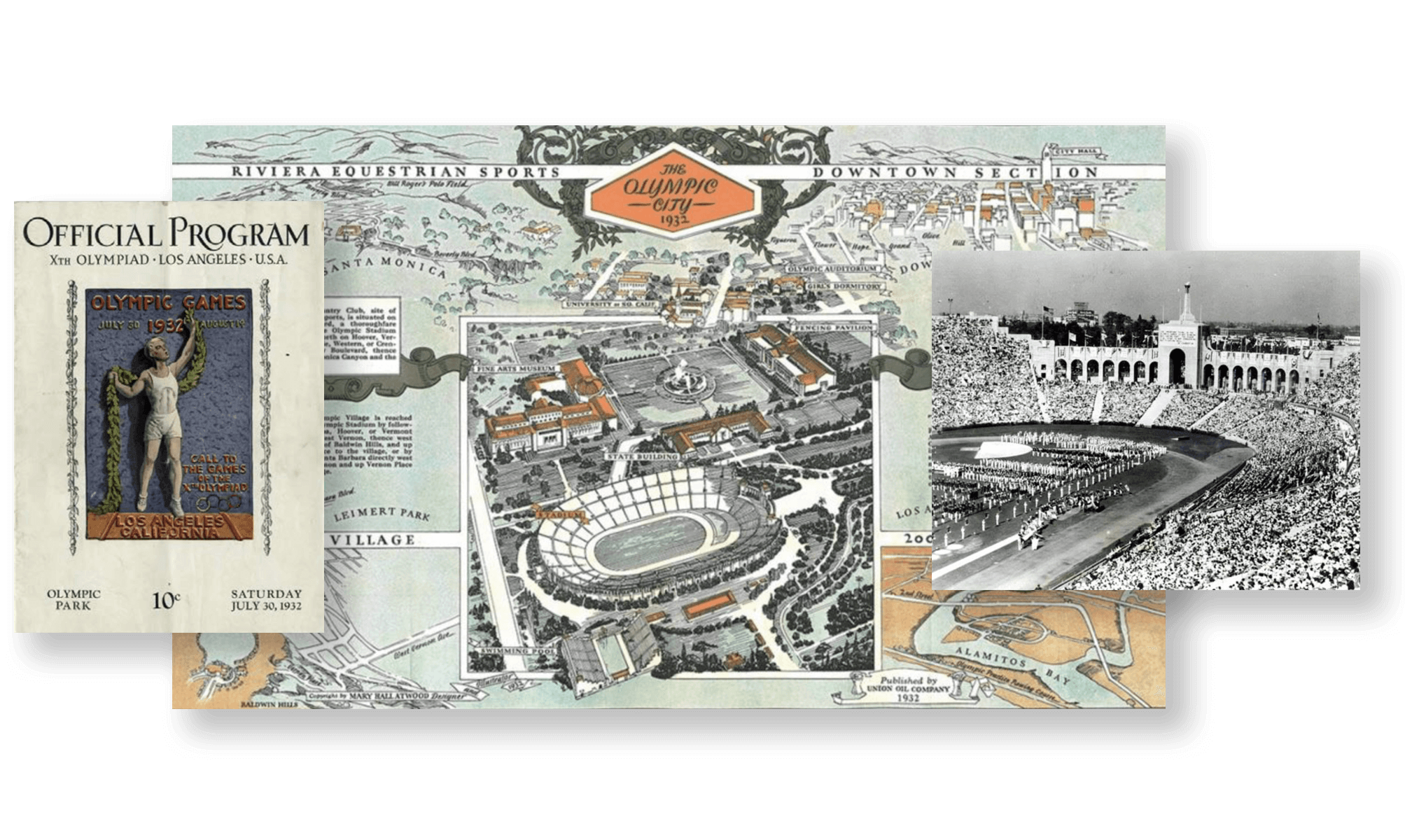 Cinco de Mayo — or the fifth of May — is a holiday commemorating the date of the Mexican army’s 1862 victory over France at the Battle of Puebla during the Franco-Mexican War (1861-1867). A relatively minor holiday in Mexico, in the United States Cinco de Mayo has evolved into a celebration of Mexican culture and heritage, particularly in areas with large Mexican-American populations.

In 1934, the Los Angeles Memorial Coliseum celebrated its first Cinco de Mayo event which was an exciting culmination of both sports and carnival activities featuring athletes & performers of Mexican descent displaying their talents to all in attendance.

During President Franklin D. Roosevelt’s first visit to Los Angeles as the President of the United States, he toured the city by motorcade. At the Los Angeles Memorial Coliseum, he spoke to the crowd from his car. In his speech, he rallied behind the “liberal spirit” of California, commemorating how “no state has a finer record in the great task of putting the strong arm of Government behind the less fortunate members of society.” The rally drew in a crowd of 70,000 people.

FDR had won the popular vote of the election with 57% of the votes and swept the electoral votes, receiving over 470. Besides the Coliseum, FDR was hosted with open arms in California, including a parade, events at the Hollywood Bowl and an evening of entertainment hosted by Jack Warner of Warner Bros, who later went on to produce movies supporting FDR’s policies. 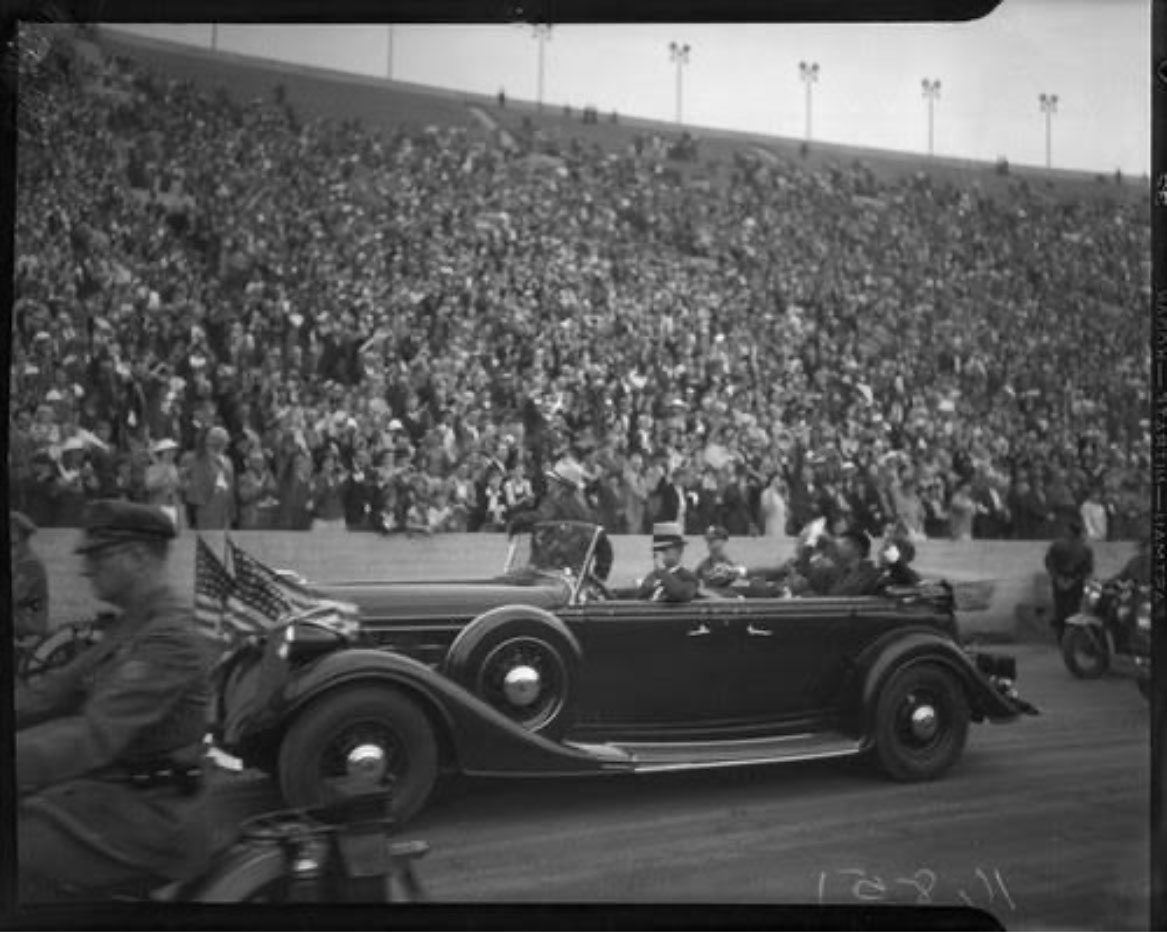 Today marks the 81st anniversary of the “Midsummer Ice Skating Carnival” held at the Coliseum. With tickets selling for only 30 cents, this was the first time that an ice skating exhibition was held at an outdoor football stadium. Headlining the event was world-famous figure skater, Olympian, and Hollywood actress, Sonja Heine. Known as the “Norwegian Ice Queen”, Heine has been credited with putting the sport of figure skating on the map. 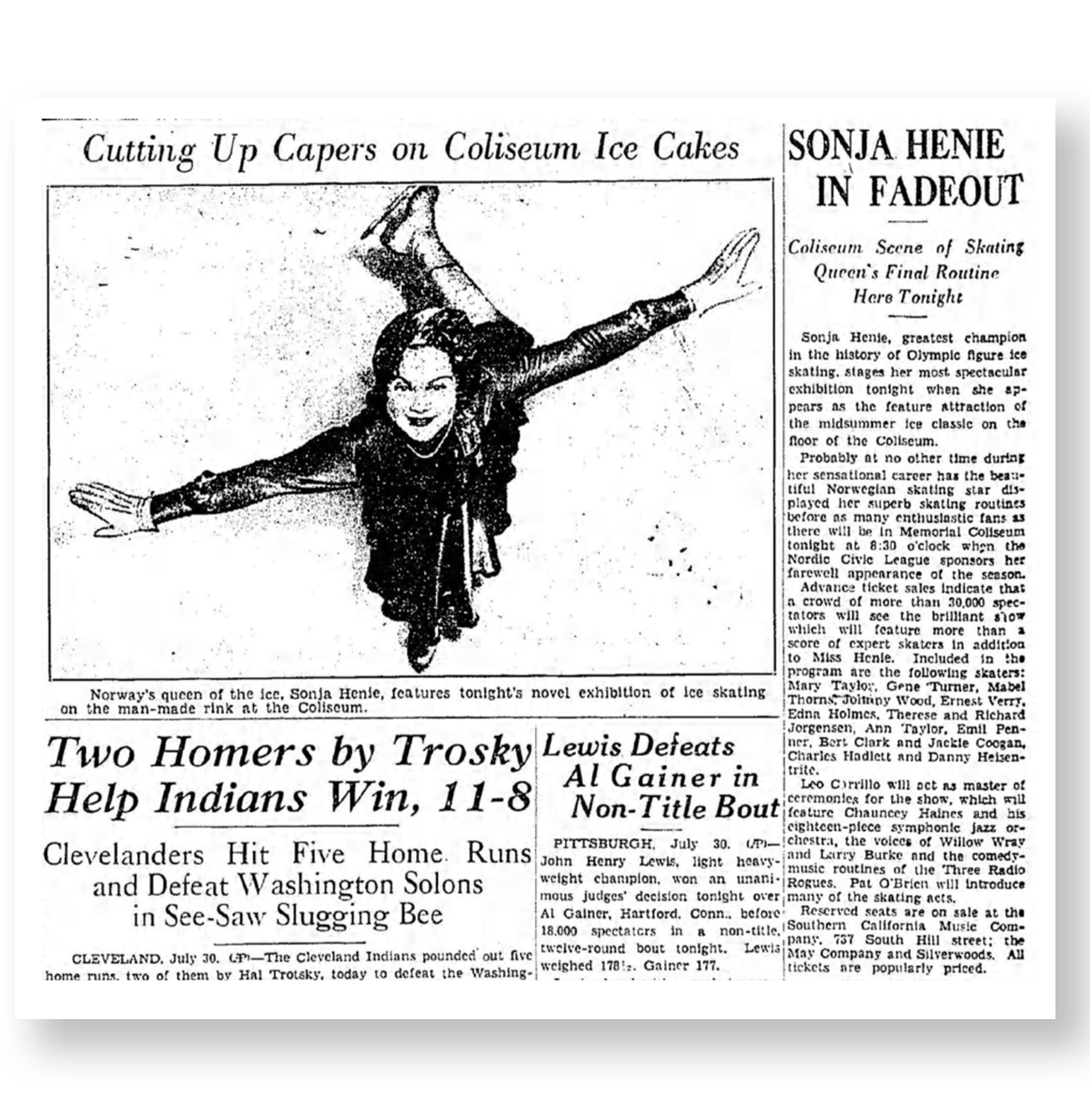 A ski jump competition took place inside of the Coliseum. Known as the “golden age” of this sport, thanks in part to the excitement of the 1932 Winter Olympics, engineers used snow machines and crushed ice to recreate the elements. These competitions were also held in Berkeley, the Hollywood Bowl, and the San Francisco Golden Gate International Exposition on Treasure Island.