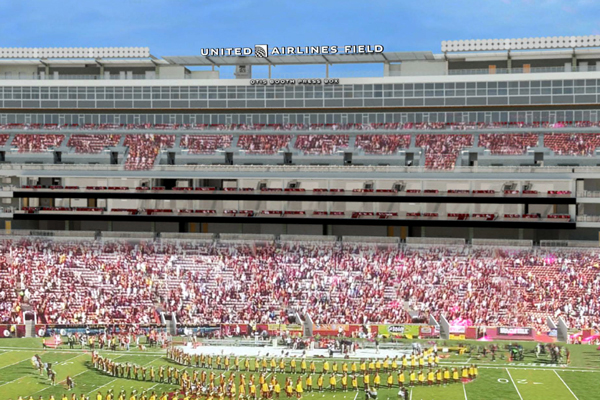 USC and United worked together to reach an agreement that retains the original venue name while still providing funding to support a $315 million project to restore and preserve the Coliseum and upgrade its facilities for fans, athletes and the community.

“USC is honored to be the caretaker of this Los Angeles treasure and, together with United, we are ensuring the Coliseum’s future as a world-class venue,” said USC interim President Wanda M. Austin. “The naming of the field is a significant step in USC’s efforts to usher in a modern era for this historic landmark and preserve its legacy. Through this process, USC was guided by doing the right thing for the community as we continue to honor our veterans. We look forward to the opening of United Airlines Field within the newly renovated Coliseum this summer.”

“United has a long history in Los Angeles, serving the city for more than 80 years. With so many employees, many of whom are proud veterans themselves, and customers that travel to or call the area home, this sponsorship is a meaningful way to underscore our commitment to California,” said Janet Lamkin, President, California for United Airlines. “We always want to do what is best for the communities in which we operate – and in this case, reaching an agreement which upholds the name of such a respected venue while modernizing it for the benefit of future generations was the right thing to do.”

In addition to the stadium’s renovation, as part of this new agreement USC and United worked together to identify additional ways to honor local veterans including providing support for veterans who attend USC as well as erecting a memorial in honor of veterans at the Coliseum. More details on these initiatives will be shared as the programs are finalized.

“I am pleased that USC and United have come together in a way that will honor the memories of veterans who served in World War I and our broader community of veterans,” said Janice Hahn, president of the Los Angeles Memorial Coliseum Commission. “This agreement ensures that United Airlines remains an important corporate sponsor of the Coliseum renovation project and that the legacy of the Coliseum remains. I am proud that we are moving forward with a shared commitment to veterans.”

About USC
The University of Southern California, founded in 1880, is one of the world’s leading private research universities. An anchor institution in Los Angeles and a global center for arts, technology and international business, USC generates more than $8 billion in economic activity in California each year and is the largest private employer in Los Angeles.

USC has a long and proud history of supporting military service members and veterans, serving as a training school for Army officers during World War I, launching the first master’s of social work dedicated to serving veterans, creating a master’s of business for veterans and last year developing dedicated student housing for veteran students.

About United
United’s shared purpose is “Connecting People. Uniting the World.” We are more focused than ever on our commitment to customers through a series of innovations and improvements designed to help build a great experience: Every customer. Every flight. Every day. Together, United Airlines and United Express operate approximately 4,900 flights a day to 355 airports across five continents. In 2018, United and United Express operated more than 1.7 million flights carrying more than 158 million customers. United is proud to have the world’s most comprehensive route network, including U.S. mainland hubs in Chicago, Denver, Houston, Los Angeles, New York/Newark, San Francisco and Washington, D.C. United operates 779 mainline aircraft and the airline’s United Express carriers operate 569 regional aircraft. United is a founding member of Star Alliance, which provides service to 193 countries via 28 member airlines. For more information, visit united.com, follow @United on Twitter and Instagram or connect on Facebook. The common stock of United’s parent, United Continental Holdings, Inc., is traded on the Nasdaq under the symbol “UAL”.

Next The Cranes are Down