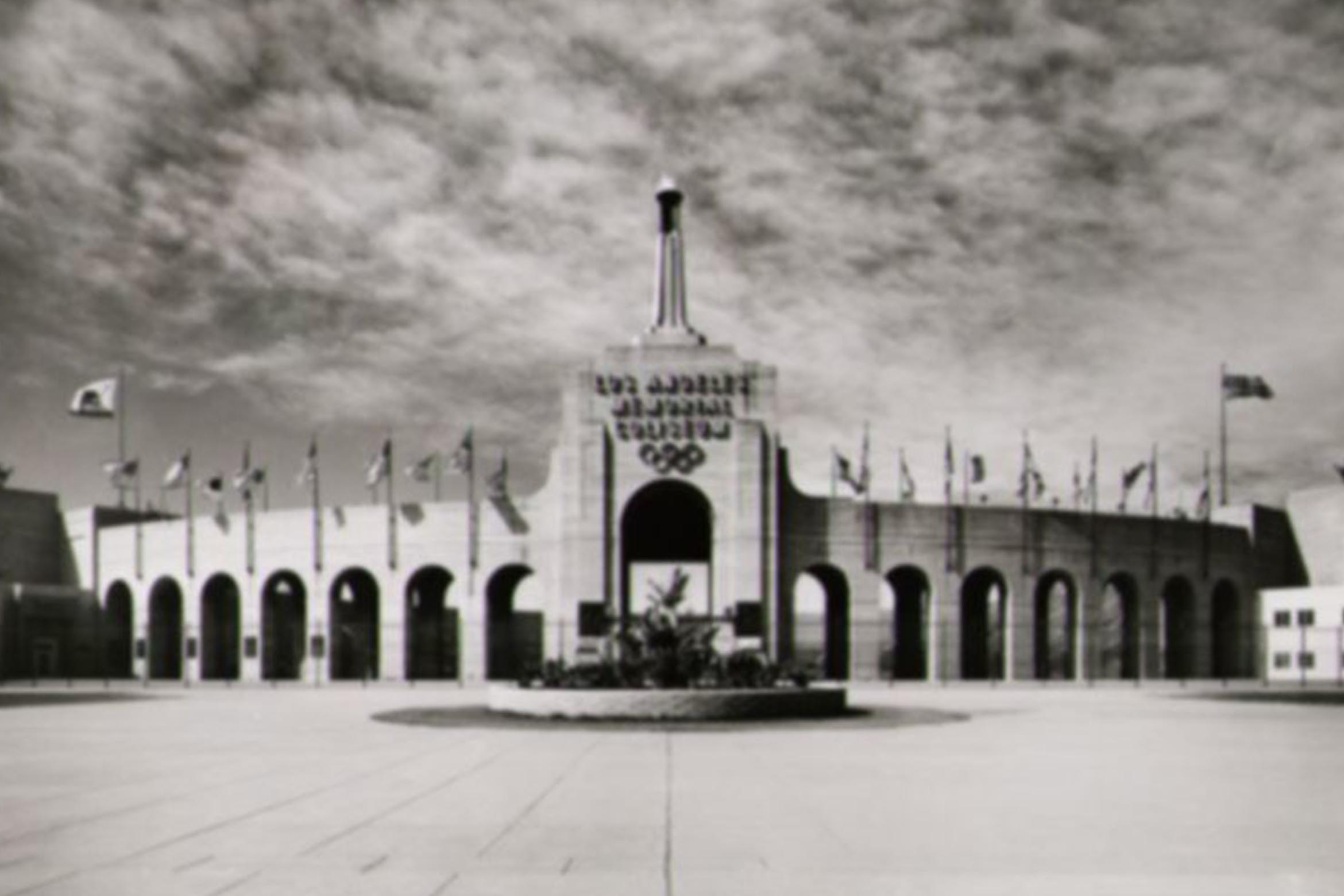 The Los Angeles Memorial Coliseum remembers the Games of the Modern Xth Olympiads as it now celebrates its 83rd Anniversary of the 1932 Summer Olympic Games, the first of two Olympiads hosted, that ran from July 30th to August 14, 1932. The Games were a global multi-athletic event held in the Coliseum, which was temporarily renamed the Los Angeles Olympic Stadium. The Coliseum was commissioned to be built in 1921 as a memorial to Los Angeles veterans of World War I and was designed by notable Los Angeles architects John and Donald Parkinson, a father-and-son architectural team. The original bowl’s preliminary construction costs were $954,873. It was later enlarged for the 1932 Summer Olympic Games from its original 1923 capacity of 75,144 seats to 105,574 seats. The Olympic cauldron torch was added to the peristyle on the east end of the stadium, as well as the Olympic rings symbols which were placed over the main center entrance of the peristyle. Between the double peristyle arches is the Coliseum’s “Court of Honor,” plaques recognizing the events and participants in Coliseum history, including a full list of 1932 and 1984 Olympic gold medalists that now decorate the travertine tiled walls. Click here for the complete roster of honorees.

During the 1920s there were no other cities that were financially able to bid for hosting the 1932 Games due to the long and overwhelming economic downturn of the Great Depression. Many nations and athletes were unable to pay for the trip to the remote location of Los Angeles. But, it was indeed, Los Angeles who successfully hosted the Games and originated many successful firsts of influential endeavors. Los Angeles handled its finances successfully and inspired an encouraging awe that reassured the world of future Olympic Games to come.

For the first time in the Olympics’ history an Olympic Village was built in Baldwin Hills for more than 550 two-bedroom portable bungalows, covering 321 acres. Providing athlete housing became the model for all future Olympic Games. There were 1,836 male athletes staying at the Village and 126 female athletes at the luxurious Chapman Park Hotel on Wilshire Boulevard, located directly across the street from the former Brown Derby restaurant and the Ambassador Hotel. The men’s housing was “a group of several hundred houses, a 1200-foot-long dining hall and a large administration building,” as reported by the Games Popular Science Monthly on the Olympic Village plans that also included a post office, library, hospital, dental laboratory, theater, over 40 dining commissaries, a radio station and many other amenities for both men and women athletes.

Fifteen sports venues were used, most of which were existing locations due to the high costs of construction and building materials. The venues included two golf courses, two city parks, three public highways, and a city road. The Swimming Stadium was the only new venue constructed for these games and was built at first as a temporary venue but was then converted into a permanent indoor community pool. The Games also featured the first use of uniform automatic timing and photo-finish photography. It was also the first time a victory podium was used for awarding the gold, silver and bronze medals. American football and lacrosse were held but were not awarded medals as they were demonstration games. The peristyle was outfitted with the first mechanical scoreboard on which was displayed a quote by the founder of the modern games, Baron Pierre de Coubertin: “The important thing in the Olympic Games is not winning, but taking part. The essential thing is not conquering, but fighting well.”

Hollywood royalty was front and present, volunteering their time for promoting the Games. Such celebrities included Douglas Fairbanks, Charlie Chaplin, Marlene Dietrich, and Mary Pickford. Ticket sales were said to have picked up even more as the stars were favorites of the American public. U.S. organizers of the Games tried to get President Herbert Hoover and his wife Lou Hoover to kick off the ceremonies since they both went to Stanford, and the First Lady grew up in Whittier. Both could not attend because the President wanted to focus on his re-election. Instead, Vice President Charles Curtis read a message at the Games which turned out to be a roaring success. As for President Hoover, he lost all victories from the state of California, as well as the 1932 election.

The United States won more of each medal than any other country for 41 golds, 32 silvers and 30 bronzes for a total of 103 medals in all. One of the medal winners of the Games was Babe Didrikson who won five events at the U.S. Olympic trials. The 1932 Olympic rules only allowed women to compete in no more than three events. Babe came in with the gold twice and once for the silver: the 80-meter hurdles, javelin and high jump. American women dominated in swimming, taking four of five gold medals. Swimmer Helene Madison won three gold medals in the 100 and 400 meter freestyle races and earned a third gold as part of the U.S. relay team. The first race-walk event was also a first to be held at the Games and was won by Eddie Tolan for the 100 and 200 meter runs.

Fifty-two years later the 1984 Summer Olympics, officially known as the Games of the XXIII Olympiad, was the second grand occasion that Los Angeles hosted the Games, and just like the first 1932 Olympic Games, it was successfully managed for the games, athletes and financially. In 1984, the State of California and the United States Government declared the Los Angeles Memorial Coliseum a State and Federal Historical Landmark for its contribution to the history of California, as well as to that of the United States as a whole.

Happy 83rd Anniversary of the 1932 Summer Olympic Games at the Los Angeles Memorial Coliseum. All the very best to the greatest stadium in the world for many more years, and Olympic Games, to come!

Next Special Olympics World Games "Most Inspirational Event Ever"