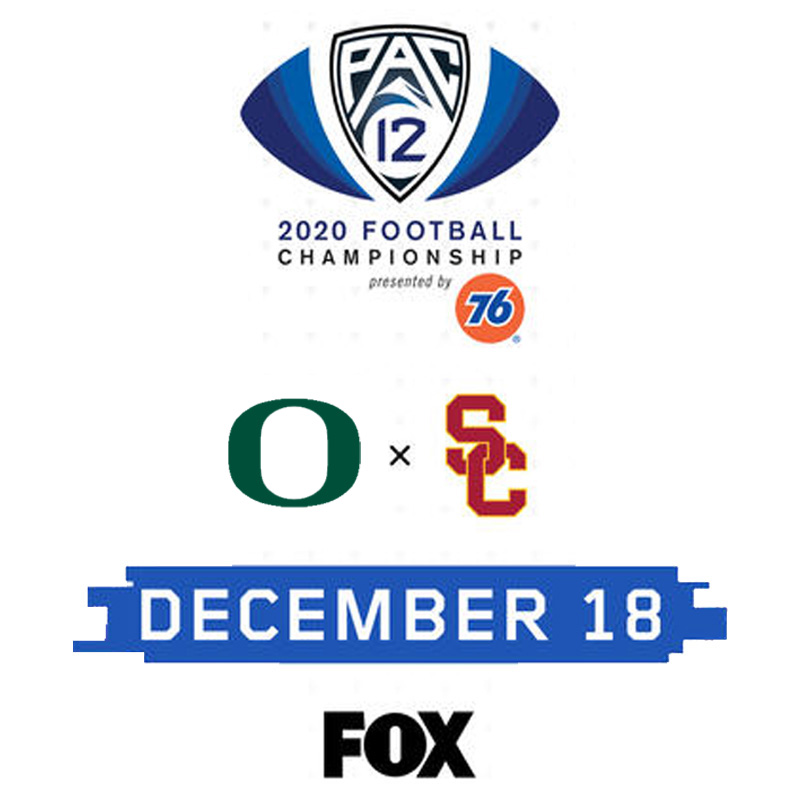 The Pac-12 has, after consultation with Washington, made the decision to replace Washington with Oregon as the Pac-12 North Division team to face South Division champion USC in the Pac-12 Football Championship Game scheduled for Friday, December 18.

The Conference title game will take place as a home-hosted model this season with USC earning the home game for United Airlines Field at Los Angeles Memorial Coliseum. The #Pac12FCG will be televised on FOX, with coverage beginning at 4 p.m. PT / 7 p.m. ET ahead of the 5 p.m. / 8 p.m. ET kickoff, and will be broadcast via ESPN Radio.

“In a football season that has thrown unprecedented challenges and adversity at our football teams and student-athletes, USC and Washington have performed at the highest levels and earned their places in the 2020 Pac-12 Football Championship Game as the Pac-12 South and North Champions,” said Pac-12 Commissioner Larry Scott.

USC is ranked No. 15 in the latest CFP rankings (Dec. 8) and defeated rival UCLA, 43-38, in its regular season finale. The Trojans entered play this week having started 4-0 overall for the first time since 2017 and 4-0 in Pac-12 play for the first time since 2006. As the host for the 2020 title game, USC is making their third #Pac12FCG appearance and first since 2017. The Trojans entered Saturday’s game needing either a win over UCLA or a loss for No. 21 Colorado as the Buffaloes fell by a score of 38-21 to UTAH.

In compliance with Los Angeles County Department of Public Health current health orders, spectators are not allowed. During spectator-free games, facility occupancy is limited to those who are essential for game day operations (e.g., TV/radio broadcast crews, event/operations crews, team coaching staff, medical staff, athletes, etc.). To the extent possible, all individuals admitted to the facility have been instructed to maintain a physical distance of at least 6 feet and access to the facility has been limited to certain areas.

During this public health emergency, Exposition Park will continue to perform its essential functions in service to the public. Some activities will be modified to accommodate social distancing practices and to help reduce the spread of COVID-19.

Exposition Park Management strongly encourages everyone to follow the guidance on general health and safety best practices from the California Department of Public Health:

For those wishing to take a break in the outdoors, public health officials are advising them to walk, run, hike and bike in their local neighborhoods and walk to parks. Most importantly, the public is being asked not to congregate in the outdoors. Everyone has the responsibility to “flatten the curve” by maintaining a social distance of 6 feet or more when recreating in the outdoors.