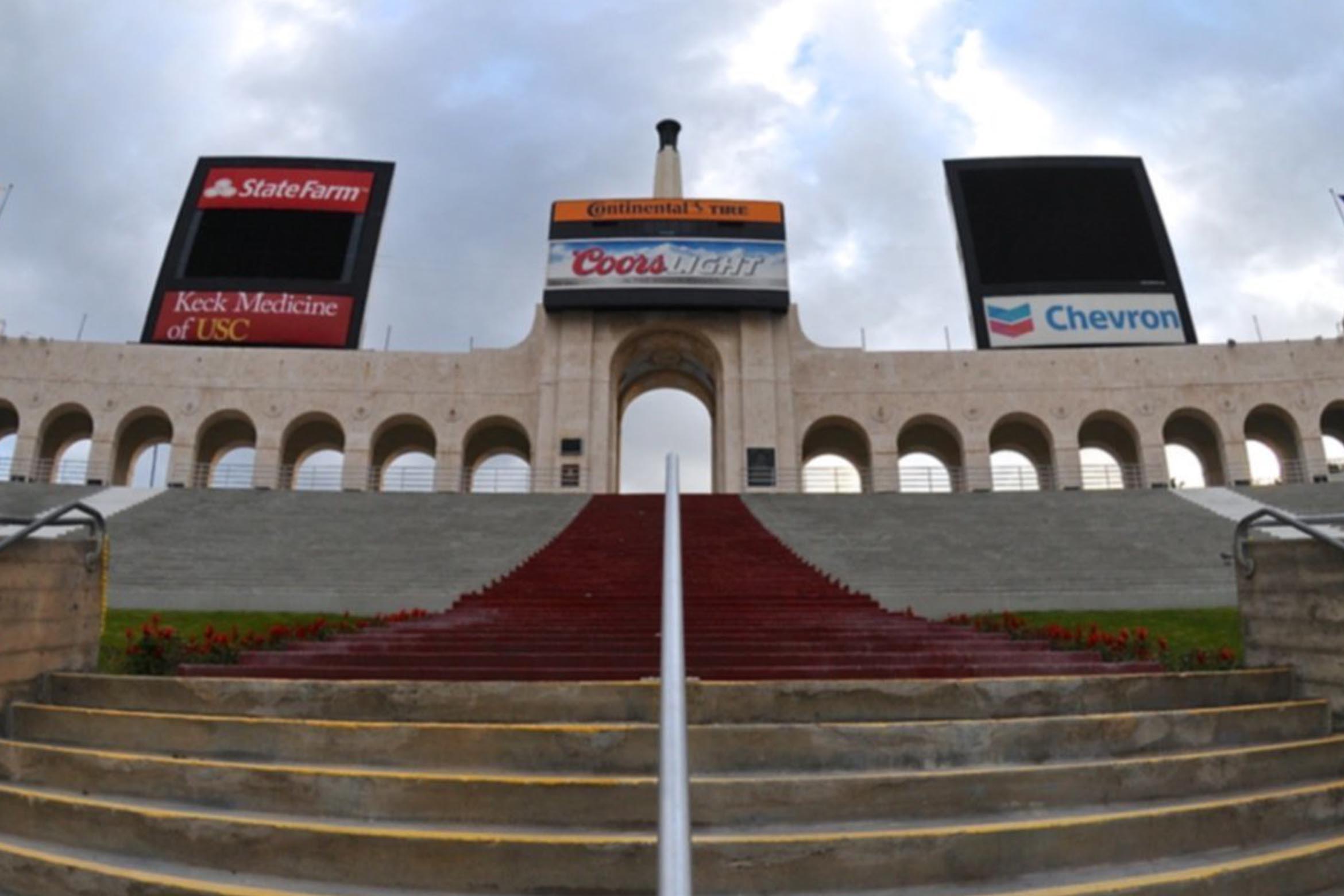 To view live-streaming of the removal of the video boards, click here.

The iconic Peristyle of the Los Angeles Memorial Coliseum will soon take on a look not seen in 33 years, as the large video boards, originally installed in 1984 for the Games of the XXIIIrd Olympiad, will be removed in order to restore the famed column and archway structure to its original glory.  The project, commencing the week of March 27, is part of an overall $270 Million renovation of the Coliseum being undertaken by the University of Southern California and completed in time for the 2019 football season.

“Restoring the Peristyle of the 94-year old National Historic Landmark stadium to reflect the vision of the original builders and architects is a wonderful thing,” said Joe Furin, General Manager of the Coliseum, “especially when you consider that it was first shared with the world during the 1932 Olympics and enjoyed by Angelenos attending events here for over six decades.”

The two large structures, along with the advertising border that surrounds the center game clock, will be dismantled in pieces over a two week period and then trucked away to a salvage yard. This is only one phase of returning the Peristyle to its historic look.  Damaged travertine limestone tiles will be replaced or fixed, the entire structure cleaned, and the restoration of the decorative mural underneath the center arch will also be undertaken.  Replacing the old video boards will be two state-of-the-art, high definition display boards incorporated for the fans enjoyment into the northeast and southeast seating sections, so as to maintain the look of the Peristyle as it was originally intended.

The Los Angeles Memorial Coliseum, modeled after the original Roman Colosseum, was built in 1923 by John and Donald Parkinson, father and son architects.  The Peristyle, consisting of the large center arch, six flanking arches on either side, and a total of 24 columns, quickly became the signature feature of the stadium.  With the awarding of the Games of the Xth Olympiad in 1932 to the City of Los Angeles, the stadium was expanded to over 100,000 seats and the Olympic Cauldron was added to the Peristyle.  The cauldron was first lit for the 1932 Games, as well as for the 1984 Summer Games, along with countless special events over the nearly century-long history of the Coliseum.

Next MEXICAN NATIONAL TEAM ADDS LOS ANGELES TO 2017 U.S. TOUR AS SQUAD GEARS UP FOR QUALIFIERS AND 2017 FIFA CONFEDERATIONS CUP