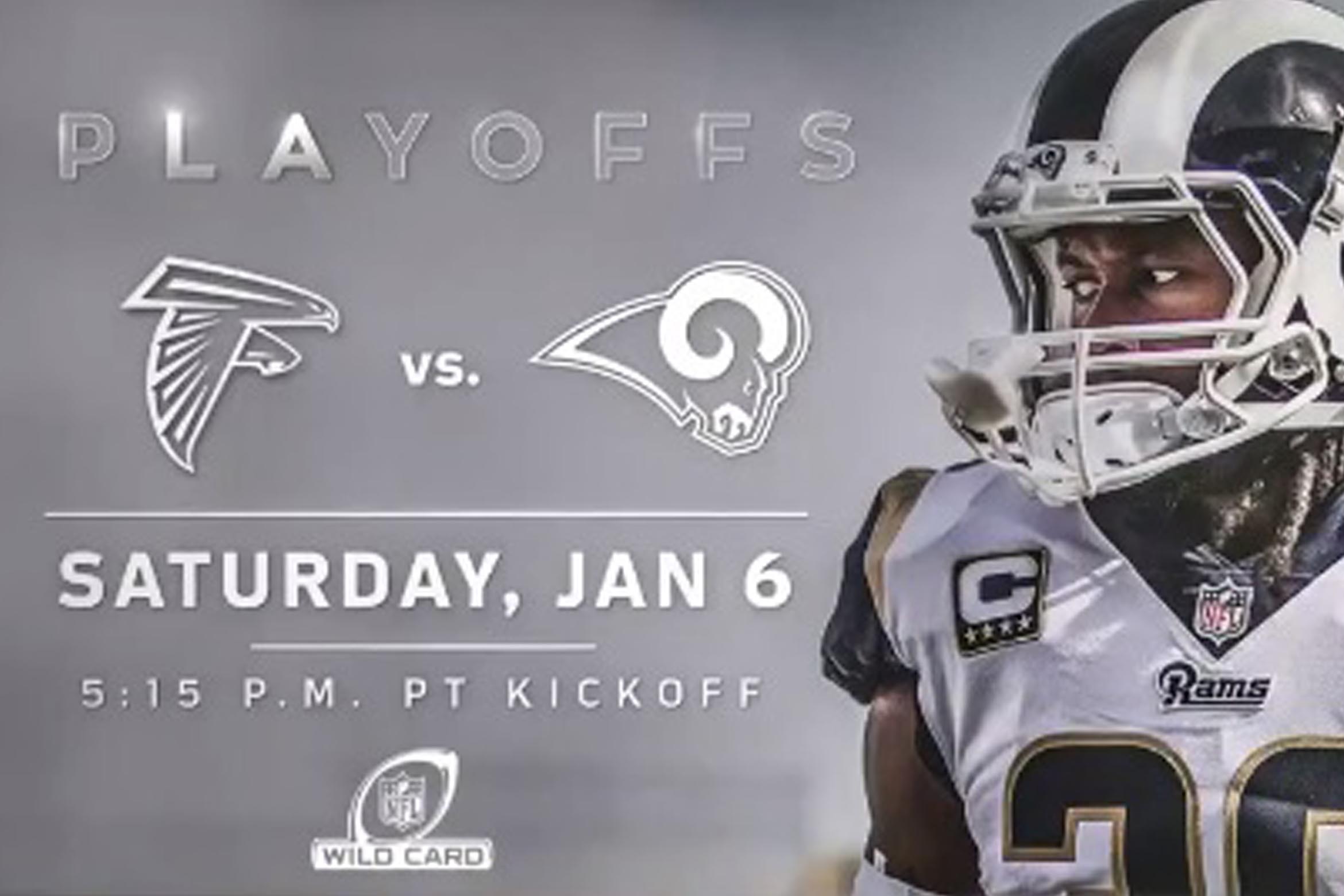 Hall of Famers Dickerson, Mack and Pace to Participate in Coin Toss

The Los Angeles Rams will host the Atlanta Falcons for the NFC Wild Card Round on Saturday, January 6 at 5:15 p.m. PT at the L.A. Memorial Coliseum. The first Rams postseason matchup at the LA Memorial Coliseum since 1979, sponsored by Hyundai, will be televised on NBC, as well as on radio in English on ESPN LA 710 AM and 93.1 Jack FM, and in Spanish on ESPN Deportes 1330 AM. Tickets to the NFC Wild Card game are available at TheRams.com/Playoffs or by calling (800) 745-3000, with prices starting at $85.

In celebration of this historic game, the team will honor a variety of Rams Legends on Saturday including ISAAC BRUCE, ERIC DICKERSON, TOM MACK, ORLANDO PACE and JACKIE SLATER.

All gates will open at 3:00 p.m. PT, with select gates (1 and 28) opening at 2:00 p.m. PT for fans who wish to visit the Corona Beach House or Rams Party Zone spaces located on the Peristyle end of the stadium that feature concessions and shade open to all ticketholders. Fans will receive a NFC West Champion rally towel upon entry at all gates.

Rams Fan Fest is located on Christmas Tree Lane in Expo Park on the East side of the Coliseum and will be open from 12:30 – 4:30 p.m. PT. Activities include the Cedars-Sinai Kids’ Zone, live pregame radio broadcast with 710 ESPN LA, opportunities to sign up and win exclusive Rams experiences, as well as Rams merchandise and concessions available for sale.

Below are details around how Rams Legends will be celebrated on Saturday. For more information about Rams gamedays, please visit www.therams.com/gameday or the Rams Mobile App.

RAMS HALL OF FAME ALUMNI TO BE RECOGNIZED DURING COIN TOSS

Eric Dickerson established rookie records for most rushing attempts (390), most rushing yards gained (1,808) and most rushing touchdowns (18). His efforts earned him All-Pro, Pro Bowl, Player of the Year and Rookie of the Year honors. In 1988, Dickerson became the first player in NFL history to gain more than 1,000 yards in seven consecutive seasons and was the fastest running back to reach 10,000 yards (91 games). He is a six-time Pro Bowl selection and a five-time All-Pro.

In his 184-game tenure at left guard with the Los Angeles Rams, Tom Mack never missed a game. His consecutive game streak ranks third in Rams’ history, behind only Jack Youngblood and Merlin Olsen. Mack enjoyed 12 winning seasons, winning the division eight times and playing in four NFC Championship games. He earned 11 Pro Bowl invitations and was an All-Pro or All-NFC selection nine times in a ten-year span (1969-1978).

The former first overall pick in the 1997 NFL Draft, Orlando Pace was an integral member of the Rams’ explosive offense that transformed the franchise into a perennial winner. He was part of the “Greatest Show on Turf” offense that produced three straight seasons of scoring more than 500 points. In 1999, the Rams advanced to the playoffs with wins over the Minnesota Vikings and Tampa Bay Buccaneers before capturing a victory in Super Bowl XXXIV over the Tennessee Titans. Pace was a seven-time Pro Bowl selection and a five-time All-Pro and is a member of the NFL’s All-Decade Team of the 2000s.

MEMBERS OF 1979 LA RAMS TEAM TO LIGHT THE COLISEUM TORCH

On Saturday, former Rams receiver ISAAC BRUCE will be honored on the field in the south east end zone. A highlight tape of his career accomplishments will be played on the stadium video boards and Bruce will be congratulated for being named a finalist in the Pro Football Hall of Fame Class of 2018.

Bruce was drafted by the Rams in the second round (33rd overall) of the 1994 NFL Draft after playing his college ball at the University of Memphis. In his 14 seasons with the Rams (1994-2007), Bruce played in 197 games (179 starts) and totaled 942 receptions for 14,109 yards and 84 touchdowns, currently holding the Rams’ record in all three categories. He was named to four Pro Bowls, including three in a row from 1999-2001. In the Super Bowl XXXIV victory against the Tennessee Titans, Bruce hauled in six passes for 162 yards including the 73-yard game-winning touchdown. Prior to his retirement, Bruce also held the distinction of being the last active NFL player who had competed for a Los Angeles-area franchise before the team moved to St. Louis following the 1994 season.

Rams Legend JACKIE SLATER will be honored during the first timeout of the second quarter.

Slater was drafted in the 3rd round (86th overall) by the Los Angeles Rams in the 1976 NFL Draft. He played 20 seasons with the Rams (1976-1995), tied third all-time for the most seasons played in NFL history. Slater’s 259 regular season games played was the most ever by an offensive lineman when he retired and his 18 playoff game appearances are a Rams’ record.  He was a First- or Second-team All-Pro selection five times and was a seven-time Pro Bowl selection. Slater currently serves as a football analyst for FOX with former Rams teammate Vince Ferragamo.

2018 Rams Hall of Fame finalist Isaac Bruce, semifinalist TORRY HOLT, 1999 HOF inductee Tom Mack, and 2016 HOF inductee Orlando Pace will visit the Vivid Seats Tailgate area from 3:30 – 4:15 PM, providing fans with the opportunity to take photos and get autographs from some of their favorite Rams Legends.

The Legends also will join ESPNLA’s Voice of the Rams J.B. LONG for an onstage “chalk talk” at 3:45 PM to discuss the Rams-Falcons NFC Wild Card matchup.