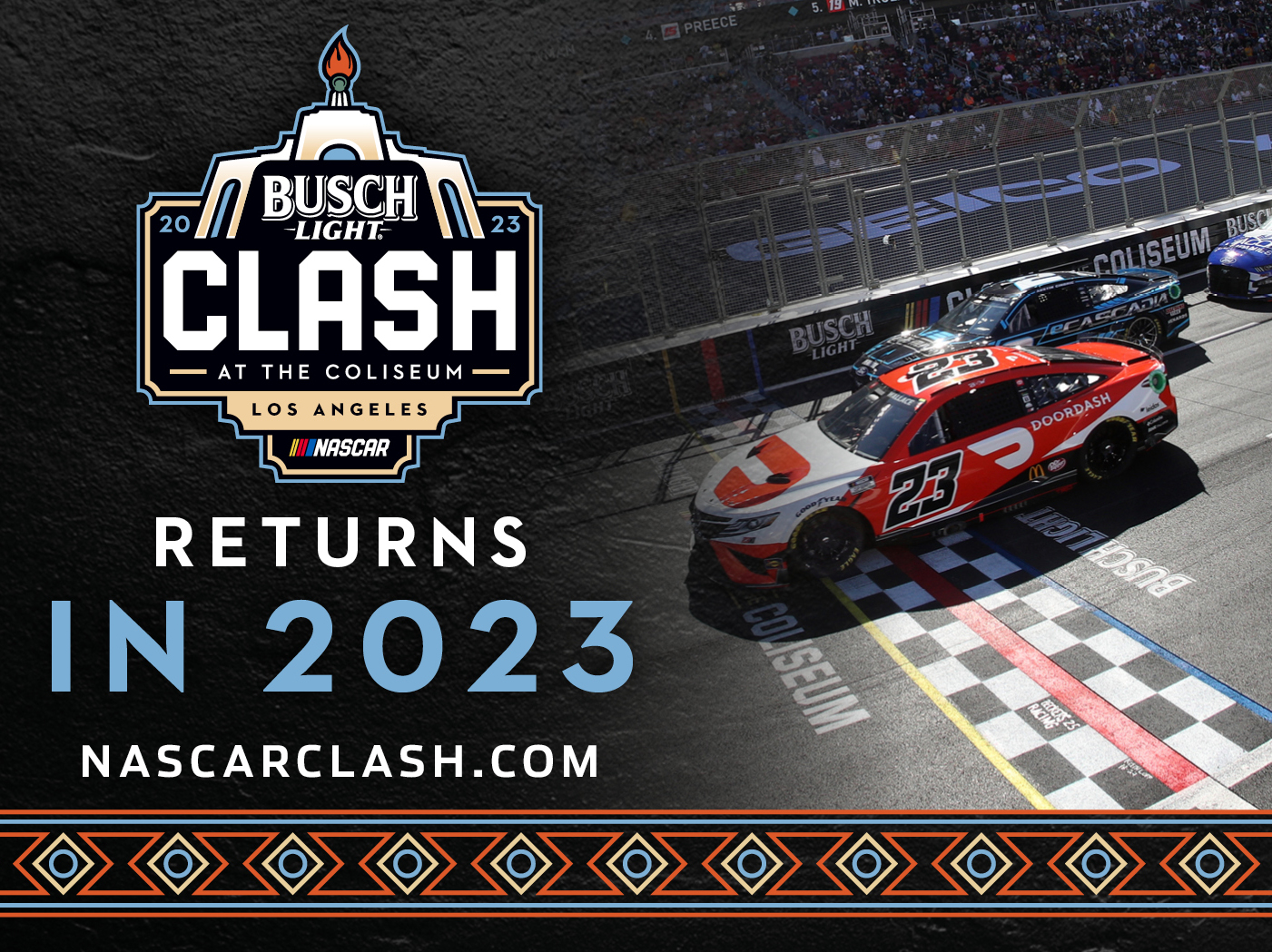 Fans can now buy tickets to the most-anticipated sequel in recent NASCAR history.

NASCAR announced today that tickets are on sale for the 2023 Busch Light Clash at the Coliseum as excitement builds for racing’s return to the Los Angeles Memorial Coliseum. The blockbuster event will be held on Feb. 5 and include all of the thrills, chills and spills that only NASCAR racing can provide inside one of the most iconic venues in the history of sport.

“The LA Coliseum was the place to be during the first Sunday in February this year, and that will certainly be the case for next year’s Busch Light Clash,” said Ben Kennedy, NASCAR’s senior vice president for racing development and strategy. “The fans who missed out this year now have a golden opportunity to join us in 2023, and it’s going to be a celebration to remember. It will be the first event of NASCAR’s 75th Anniversary season and an integral part of the Coliseum’s centennial.”

Tickets for the 2023 Busch Light Clash at the Coliseum begin at $65, and kids 12-and-under are $10. Those are the same prices charged for this year’s inaugural showcase, which not only featured NASCAR’s season-opening exhibition race, but also included unforgettable performances by international superstars Ice Cube, Pitbull and DJ Skee.

The musical lineup for the 2023 Busch Light Clash will be cast in the coming weeks, but one thing is already certain – the stars of the NASCAR Cup Series will be the main box-office draw. They’ll deliver intense, door-to-door racing on a quarter-mile asphalt track that’s nestled inside the Los Angeles Memorial Coliseum.  Four preliminary heats and two last-chance qualifiers will set the stage for the main event featuring 23 daring drivers. They will all try to capture the spotlight Joey Logano enjoyed by winning the first NASCAR race in the heart of Los Angeles earlier this year.

We also know that the NASCAR Fan Fest at the Coliseum will also be bigger and better, featuring more fun and interactive elements for racing fans of all ages.  Fans in California can also share their excitement by purchasing customized license plates at nascarplates.com that benefit California’s Outdoors for All initiative and The NASCAR Foundation.

For the latest information and to secure the best seats for the 2023 Busch Light Clash at the Coliseum, fans are encouraged to visit nascarclash.com.

About The Los Angeles Memorial Coliseum

The Los Angeles Memorial Coliseum, a living memorial to all who served in the U.S. Armed Forces during World War I, has been a civic treasure for generations of Angelenos.  Located in the Exposition Park neighborhood of Los Angeles, CA, the Coliseum is a 77,500 capacity multi-purpose stadium which opened in 1923. Home to the USC Trojans, the legendary stadium has been named as one of the nation’s 40 best stadiums to experience college football by Sporting News, and ranked USC football at the Coliseum as the nation’s No. 3 stadium experience by StadiumJourney.com.  Following a recent renovation in 2019, the stadium is now home to a newly added seven-story suite and press tower which includes luxurious suites, loge boxes, club seats, a new press box, and the rooftop 1923 Club with a 360-degree view of the Los Angeles basin; along with several upgrades including new seating, updated technology and concession stands, additional food options for guests, and much more.

The legacy of events and individuals hosted in nine-plus-decades reads like no other, including  the only venue to host two Opening and Closing Ceremonies, and the Track and Field Competition for the Summer Olympics (Xth Olympiad in 1932, XXIIIrd Olympiad in 1984) and soon a third (XXXIVth Olympiad in 2028); home to college football’s USC Trojans since 1923 and the UCLA Bruins (1928-1981);  professional football’s Los Angeles Rams (1946-1979 and 2016-2019); appearances by U.S. Presidents Franklin D Roosevelt, Dwight Eisenhower, John F. Kennedy, Lyndon Johnson, Richard Nixon, and Ronald Reagan; and international dignitaries such as Martin Luther King, Jr., Cesar Chavez, Pope John Paul II, the Dalai Lama, and Nelson Mandela, to name a few. Additionally, the Coliseum, designated a National Historic monument in 1984, has hosted some of the greatest acts in entertainment, including Bruce Springsteen, The Rolling Stones, Pink Floyd, Prince, and many more. For more information please visit lacoliseum.com.

Next Ye and Drake Take the Stage