Known as “The Greatest Stadium in the World”, the Los Angeles Memorial Coliseum is a living memorial to all who served in the United States Armed Forces during World War I.

Designated by Congress, May is known as “National Military Appreciation Month”. As a symbol of unity, all U.S. citizens are encouraged to honor the service & sacrifice of both active members and veterans of the Armed Forces.

On this day in history, May 8, 1945 marked the formal acceptance of Nazi Germany’s unconditional surrender of its armed forces to the Allies, thus ending World War II in Europe. In London, over a million people celebrated the end of the European war, while in the U.S. President Truman dedicated the victory to his predecessor, Franklin D. Roosevelt, who had died a month prior.

On June 9, 1945, as part of a “Welcome Home” tour, Gen. George S. Patton Jr. and Lt. Gen. James Doolittle were the guests of honor at a ceremony held at the Los Angeles Memorial Coliseum. Beginning the day with a parade throughout the city, which yielded nearly one million Angelenos in attendance, the event was led by master of ceremony, comedian Jack Benny, and kicked off with Judy Garland singing “God Bless America”. The evening consisted of vivid reenactments of actual battles, complete with tanks, B-25 war planes, and actors in military uniforms; a musical variety show; readings by legendary members of the Hollywood community, such as Humphrey Bogart and Bette Davis; and a spectacular light show to honor the fallen soldiers who gave their lives to protect and serve the United States of America. 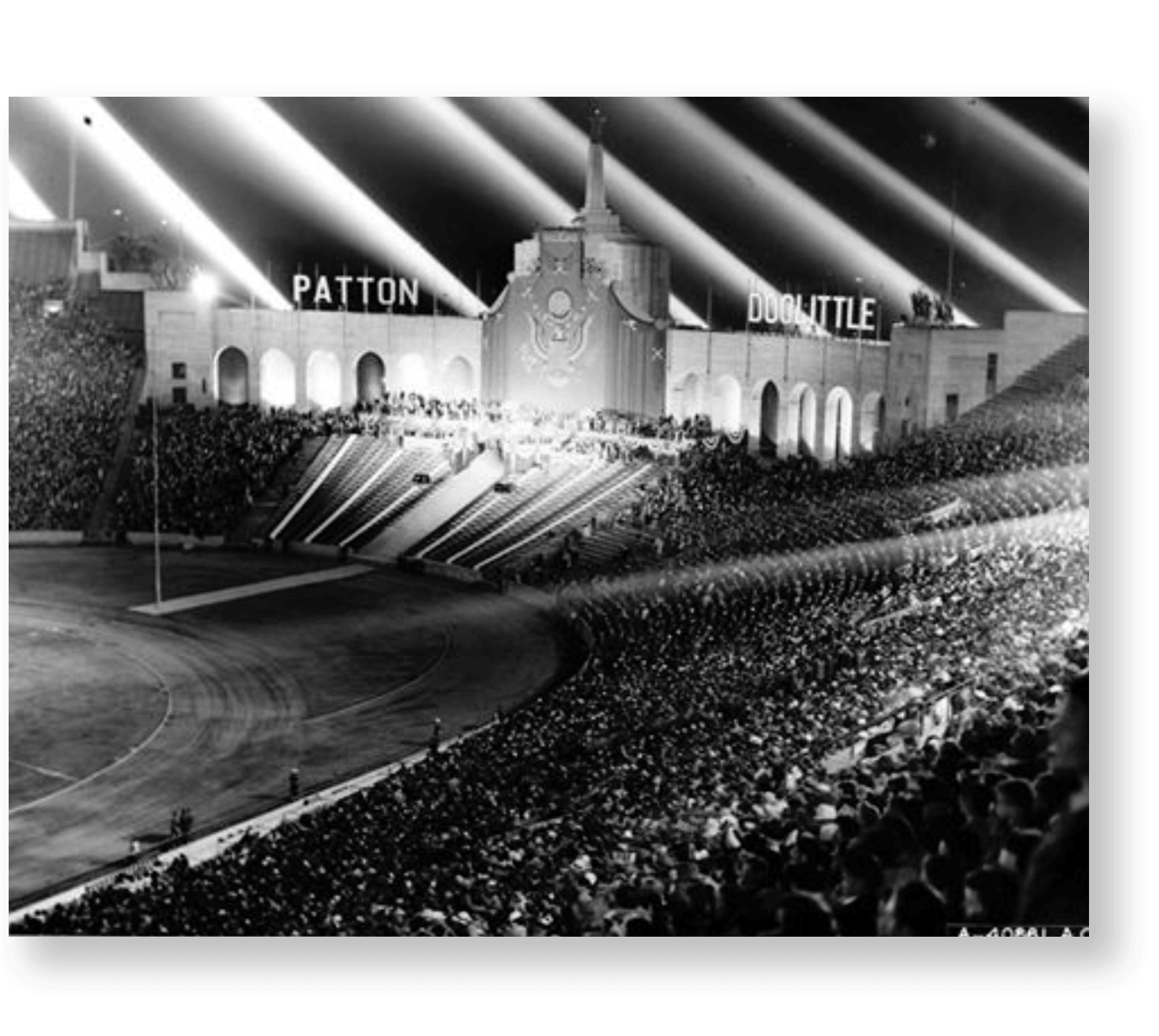 The Coliseum, a living memorial to all who served in the U.S. Armed Forces during WWI, has a long history of supporting the military. On January 8 & 9, 1944, the U.S. military and Hollywood studios joined forces to recreate a battle in the South Pacific to gain public support for the military. 178,513 spectators attended the two-day performance with Hollywood studios contributing motion picture sets, scenery and stars Bob Hope, Edgar Bergen, Charlie McCarthy, and Frances Langford. In turn, the simulated warfare was directed by Washington commanders in chief while members of the 3rd Battalion of the 140th infantry provided the action. 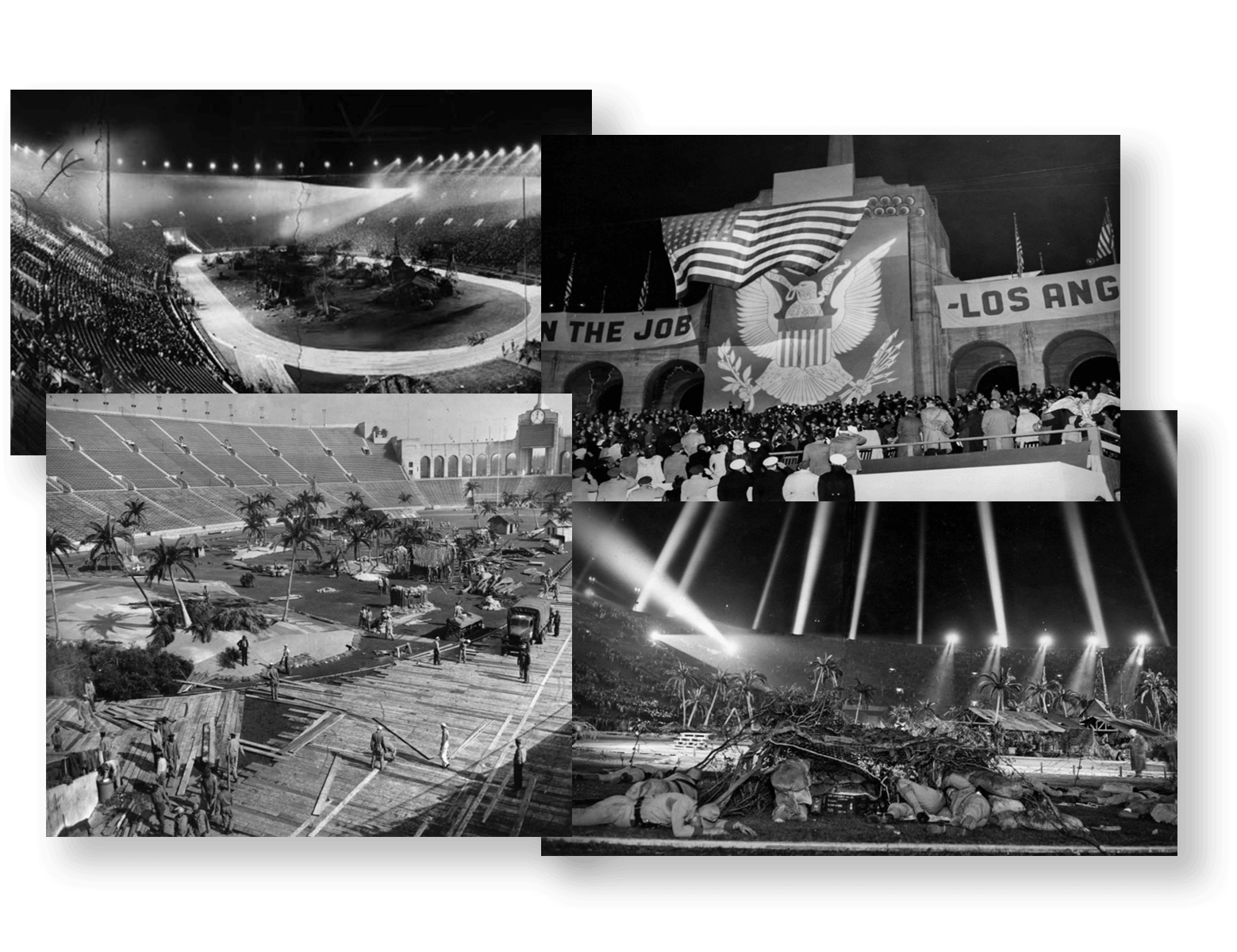 The “Army Ordnance in Action Show”, a two-day free event spread out over Exposition Park, brought in a crowd of almost 200,000.

For the audience, it was just a show, but for the soldiers, it was a training course that would help them enhance their skills for battle in World War II. The crowd was able to see Army soldiers showcasing real-life exhibits, hosting a variety of different events that included aquatic warfare in a burning oil-filled pool; first-aid demonstrations; motorcycle and tank recovery drills; a simulated battle inside the stadium; and live ammo artillery exhibitions.

The Ordnance Show, sponsored by the American Red Cross and the LA Times, was presented by the Army Service Forces & Third War Loan Drive in an effort to show Californians how their investment in war bonds and stamps was being spent. 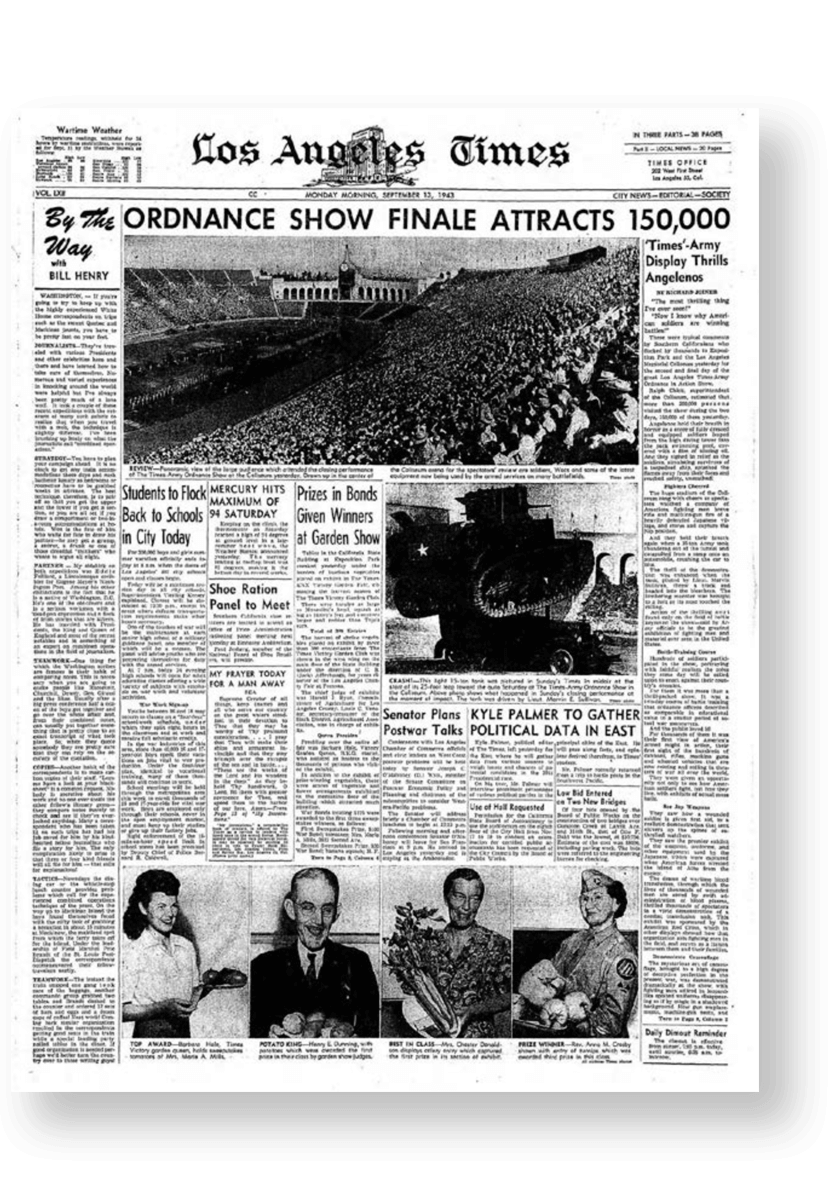 War Heroes Day, a free event open to the public and hosted by the U.S. government, was held at the Los Angeles Memorial Coliseum to honor American and British soldiers who had recently fought in World War II. Hundreds of thousands of Angelenos lined the streets of Los Angeles for a parade which started at the airport, where the soldiers had been flown in by the U.S. Army. The procession ended at the Coliseum, where a patriotic rally and “monster military display” was held before a crowd of 42,378, including thousands of troops who came from nearby military bases throughout California. The entertainment included marching bands, color guard, Air Force battle planes flying overhead, speeches from civic and military leaders, and a dramatic reenactment of battles these soldiers had fought.

Known as “The Greatest Stadium in the World”, the Los Angeles Memorial Coliseum, a living memorial to all who served in the U.S. Armed Forces during World War I, has been a civic treasure for generations of Angelenos. The legacy of events and individuals hosted in nine-plus-decades truly reads like no other. 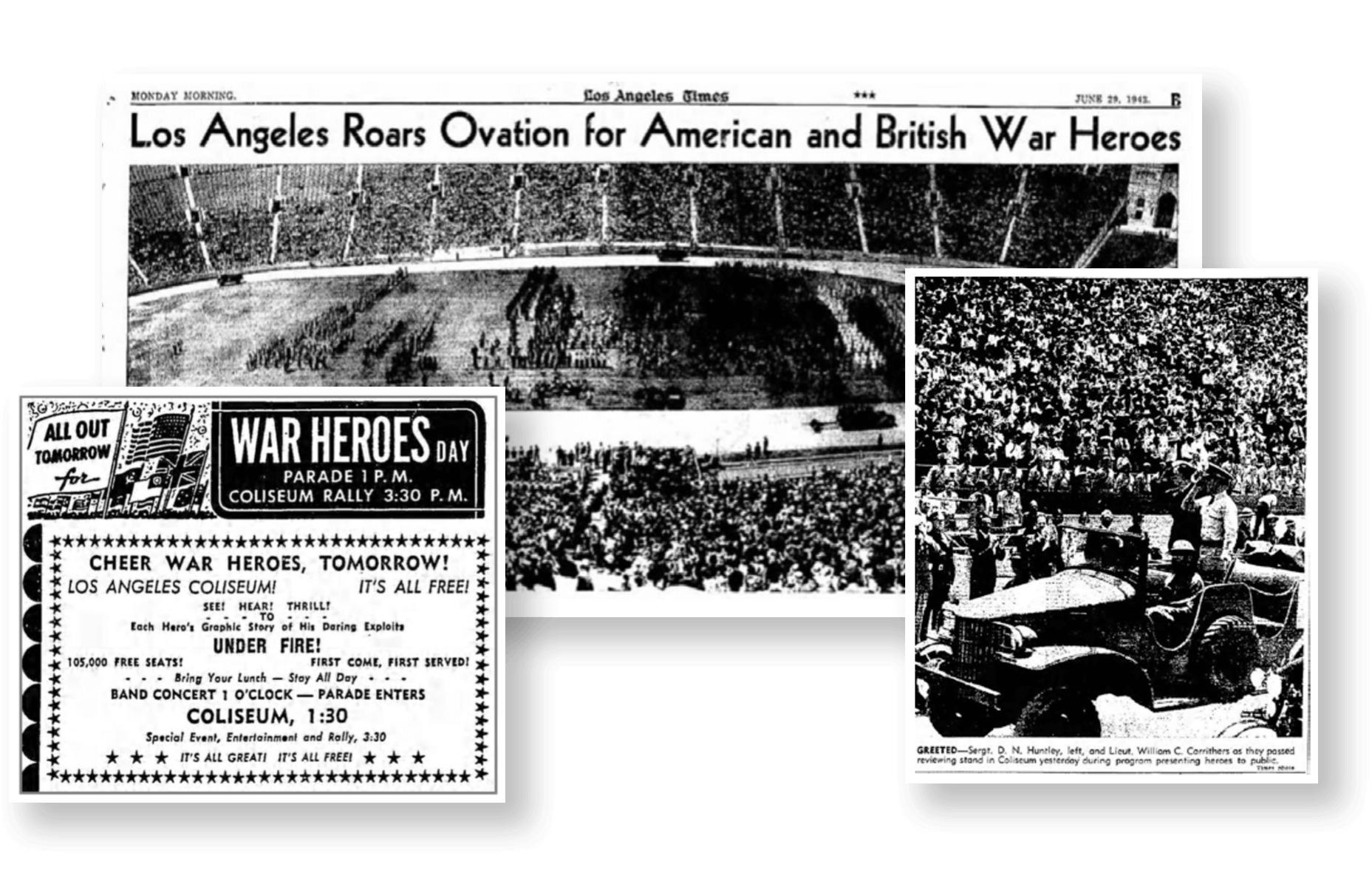